Carlsbad, Ca.   Atthaya Thitikul came from six shots back starting Sundays final round to shoot an eight under par 64 to win the 1.5 Million JTBC Classic. Two day tournament leader Nanna Koerstz Madsen bogeyed the 72nd hole to shot 70 on Sunday and finish tied for the lead with Thitikul at 16 under par.

Both players headed back to the 18th hole to begin what turned out to be a two hole playoff. After tying he first hole, Thitikul , 19, outlasted Koerstz Madsen on the second playoff hole winning the Tournament with a three-putt bogie for her first LPGA victory. ” I can’t believe I’m an LPGA winner…its just coming in my mind right now,” said Thitikul immediately after tapping in the final putt of the tournament.” I feel amazing.” 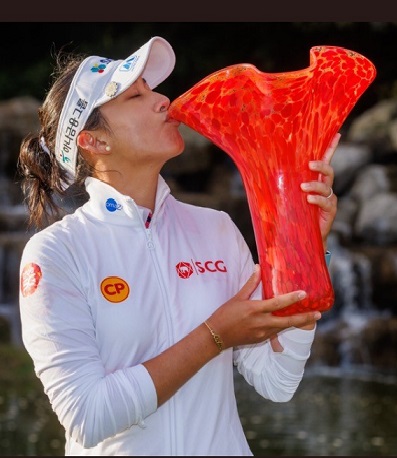 Thitikul hit 14 of 18 fairways and needed only 24 putts in the final round. First year player Koerstz Madsen had a break through playoff victory just two weeks earlier in Thailand making her the first Danish champion in LPGA history. Koerstz Madsen led after the second and third rounds this week and entered Sunday at Aviara Golf Club with a three stroke lead. Na Rin An took third place while top ranked Jin Young Ko (68) finished tied for fourth at 14 under par with Pajaree Anannarukarn (68) and Maude-Leblanc (68). All five of this years LPGA Tour winners played this week.

This was the final LPGA event before the years first major next week at Mission Hills in Rancho Mirage. The JTBC Classic was broadcast daily on the Golf Channel.