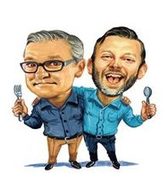 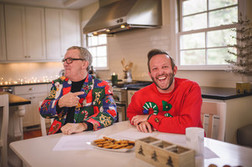 Lowry shares, “I knew I would enjoy filming these conversations with this great lineup of guests, but I wasn’t prepared to enjoy the finished episodes so much personally. Then consider how much I love Christmastime—I am a bit invested in it from a songwriting perspective after all!—and our growing viewer base, and these bonus Christmas episodes seemed like a no-brainer. Though Andrew may even be more giddy than me.”
Subtitled “Turning the Light On One Question at a Time”, Dinner Conversations is based on the belief that communion begins with good conversation, and good conversation often begins around the dinner table. The first season finds Mark and Andrew inviting acclaimed artists, authors and topic experts to gather around the dinner table to weigh in on a broad range of thought-provoking human interest conversations.
“While I have always believed people are interested in deep conversations, I honestly was not prepared for how well and widely these table talks have been received,” Greer explains. “One of the deeper conversations Dinner Conversations has begun in Mark and me, and our new viewer and listener friends, focuses on ending human trafficking through our first season sponsor, Project Beautiful. Because of the generosity Christmas inspires in us all, we hope these holiday specials also motivate our audience to engage more deeply into the conversation of preventing modern day slavery by partnering with Project Beautiful.”
Five of the debut season’s weekly episodes have already launched, with the remainder to go live, beginning in late January. Dinner Conversations is Produced and Directed by Andrew Greer and Mark Lowry serves as Co-Producer. Celeste Winstead is Executive Producer, and Chris Cameron of Center Street Recording is Assistant Director.
Listeners can subscribe to Dinner Conversations with Mark Lowry and Andrew Greer by clicking here.  Dinner Conversations can be viewed on YouTube, iTunes, Stitcher Radio, SoundCloud and many other popular audio and video podcast outlets.
ABOUT MARK LOWRY
Mark is an internationally known singer, storyteller, humorist, author and songwriter. His world-famous lyric to “Mary Did You Know?” resulted in one of the most loved modern Christmas songs of this century. Co-written with Buddy Greene, the captivating Christmas tune has been recorded more than 400 times by a broad base of music luminaries like Pentatonix, Reba McEntire, Michael English, Sandi Patty and Rascal Flatts. As a staple member of the GRAMMY®-award-winning Gaither Vocal Band, Mark has served as the sidesplitting comedic sidekick through Bill Gaither’s best-selling HOMECOMING video series and live tours. His musical recordings have earned him multiple Dove Awards, the highest honor in gospel music.
A deep thinker with an outrageous sense of humor (for which he often credits Attention Deficit Disorder), Mark’s life work consists of a deep discography of gold and platinum recordings. But it is Mark’s desire to communicate profound truths through songs and stories that keep his multi-generational audience on the edge of their seats. “I leave the lights up in the audience so I can see the audience,” Mark comments. “I love getting closer to the people. And I treasure the serendipitous moments when God shows up, without warning, but very expectedly.”
A native Texan, when Mark is not ping-ponging cross-country on tour, he settles down in Houston. Visit Mark online at marklowry.com.
ABOUT ANDREW GREER
A six-time Dove Award-nominated singer/songwriter and respected author, Andrew Greer is known for his old soul sound and thoughtful prose. His folk-gospel discography displays a deep affection for vintage spiritual songs, instinctively captured on his critically acclaimed Angel Band hymn series, having reached the Top 10 on Amazon and iTunes’ mainstream charts upon release.
“Hymns are as true to my human experience as my own catalog of songs,” Andrew shares. “In fact, if it hadn’t been for the impact of those indelible tunes, I may have never fallen in love with music, or been introduced to God.” Andrew’s 2013 recording, All Things Bright & Beautiful, held the #1 position on Nielsen Christian SoundScan’s Instrumental chart for 25 consecutive weeks.
On tour dates at home and abroad, Andrew has shared the stage with folks like Amy Grant, Andrew Peterson and Brandon Heath. His songs have been recorded by artists like Jaci Velasquez, Seth & Nirva and John Tibbs. And his stories have appeared in publications like Christianity Today, In Touch and CCM Magazine. Andrew’s second book – Winds of Heaven, Stuff of Earth: Spiritual Conversations Inspired by the Life and Lyrics of Rich Mullins – released on Worthy Publishing this fall.
Also a native Texan, Andrew now gladly calls Franklin, Tennessee home. Visit Andrew online at andrew-greer.com.
ABOUT PROJECT BEAUTIFUL
Project Beautiful is a community

of people who give monthly to Love Justice International to save precious lives from sex trafficking and slavery. Since 2004, Love Justice International (formerly Tiny Hands International) has worked primarily in Nepal, Bangladesh, and India, but they have recently expanded into South Africa, Mongolia, Zimbabwe, Malawi, and Thailand. Through transit monitoring and interception, they attack trafficking at the most strategic moment—while it is in the process of occurring and BEFORE women and children have been exploited or enslaved. Love Justice staff have intercepted over 12,000 people to prevent them from being trafficked. For more information, visit www.ProjectBeautiful.org
# # #
For More Information:
Lori Heiselman – Biscuit Media Group
714-553-5181
Lori@BiscuitMediaGroup.com