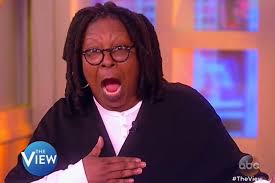 “Get The F*ck Out Of Here!” Whoopi Goldberg Screams At Judge Jeanine Pirro Off Camera After Heated Exchange

The idiots on The View picked the wrong one to abuse and berate.

The View hosts were outraged and plotted to gang rush the popular FOX News host and New York judge.

“The View” co-host Whoopi Goldberg was so irate she screamed at Judge Pirro off camera after the heated exchange, sources exclusively confirmed to Page Six.

Judge Jenanine Pirro told Sean Hannity on his radio show that Whoopi Goldberg screamed “F*ck You!!” to the Judge.

Judge Pirro asked Whoopi, “Did you just say that to me?” to which Whoopi replied, “YES! GET THE F*CK OUT OF HERE!”

@JohnCooper0610.@JudgeJeanine #BREAKING just told @seanhannity on #Hannity radio @WhoopiGoldberg behind the scenes after their on air heated exchange on the @TheView

Judge Jeanine: Did you just say that to me?

Here is the clip of the heated exchange between Judge Pirro and Whoopi Goldberg: