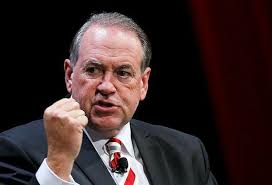 Gov. Mike Huckabee Drops A MOAB On Hillary Clinton After She Questions Trump’s Loyalty To US

(Gateway Pundit) – As TGP’s Kristinn Taylor reported, sore loser Hillary Clinton still cannot get over being defeated by Donald Trump for the presidency nearly two years ago now. Sunday night, on the eve of President Trump’s summit in Finland with Russian President Vladimir Putin, Clinton trolled Trump on Twitter, questioning his loyalty to the Unites States.

Hillary had the nerve to tweet this after she paid millions of dollars for a fake Russia dossier and sold 20% of our Uranium to Russia in exchange for $150 million to the Clinton Foundation.

Hillary tweeted, “Great World Cup. Question for President Trump as he meets Putin: Do you know which team you play for?”

Gov. Mike Huckabee
@GovMikeHuckabee
Hillary tweeted, “Q for Trump as he meets Putin: Do U know which team you play for?” @POTUS never accepted $500K dollars for 1 speech from Russian bank, taken $140m for his foundation from Russian sources, or sold Russia 1/5 of US uranium supply. Which team are YOU on, Hillary?

The President didn’t hold back at the press conference on Monday; he even slammed Hillary Clinton and brought up her 33,000 bleached bit emails.

Vladimir Putin: Last year there was one extradition case by the United States… Mueller can use this treaty as an official request to us… in this case this kind of effort should be a reciprocal one… For instance we can bring up Mr. Browder… They sent a huge amount of money $400,000,000 to Hillary Clinton! …So we have solid reason to believe that some [US] intelligence offers accompanied and guided these transactions. So we have an interest in questioning them.

In a grotesque display of unabated hubris, Hillary Clinton attacked President Trump again to deflect from her own corruption.

Hillary tweeted in response to her previous troll, “Well, now we know.” [which team you play for]

Great World Cup. Question for President Trump as he meets Putin: Do you know which team you play for?

If Hillary Clinton won the 2016 election, we would probably be at war with Russia right now.

Hillary’s loyalty lies with whomever gives her money which is why she used a private server to wheel and deal with foreign factions while she was the head of the State Department.