Conservative radio legend Rush Limbaugh died on Wednesday at the age of 70 after a battle with lung cancer, his wife announced on his radio show.

The loss: “Losing a loved one is terribly difficult, even more so when that loved one is larger than life,” Kathryn Limbaugh told listeners at the start of the show.

Rush Limbaugh was one of the most influential conservative media personalities in the United States for over three decades.

The reaction: Trump called into Fox News — his first TV interview since leaving office — to pay tribute to his friend and ally.

Trump’s words were part of a flood of public tributes by Limbaugh’s admirers, including Florida’s Republican Gov. Ron DeSantis, who called him the “GOAT.” 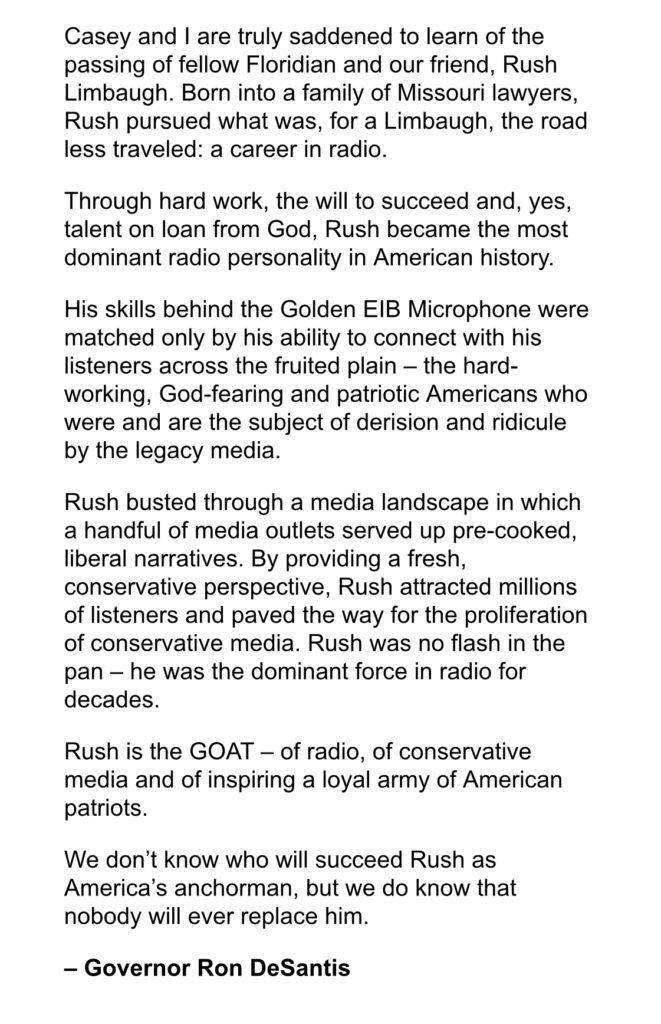 Many progressives, however, reacted to Limbaugh’s death with an outpouring of hatred: “Rest in Piss,” “Good Riddance” and “Rot in Hell” were initially trending on Twitter along with the news.

Recollections of Limbaugh’s politically incorrect and sometimes-insensitive words were mixed with outright celebration on the platform.

Jenée Desmond-Harris, a New York Times Opinion staff editor, condemned Limbaugh and his fans in a series of tweets.

Media personality Michael Malice, for one, found a silver lining in the vitriol.

“Rush Limbaugh died as he lived,” he observed in a tweet, “making the left assmad.”