By WND Staff
Published July 2, 2020 at 9:41am
Sen. Josh Hawley, R-Mo., is blasting a St. Louis prosecutor’s investigation of a couple who armed themselves to defend their property against threatening protesters as an “abuse of power.” 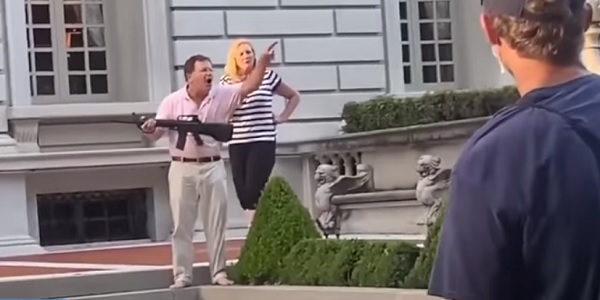 In a “Fox & Friends” interview he condemned the prosecutor, circuit attorney Kimberly Gardner, for having “dozens of violent criminals referred to her by the St. Louis police” and not prosecuting any of them.

She “turned them back out on the streets,” Hawley charged.

But she’s decided to investigate Mark McCloskey, 63, and his wife, Patricia, 61, for holding weapons while they were defending their property from the violent protesters.

“You’ve got this couple who, by the way, are on their own property – they never left their property – just standing there with their perfectly Second Amendment right to keep their arms – standing right there. And, they’re going to be investigated?” Hawley said. “I mean, it’s just insane.”

It’s “an abuse of power,” he charged.

The protesters apparently were marching to the house of Mayor Lyda Krewson. The homeowners reported to police the protesters broke a gate to get onto their private street. And they armed themselves only “when they spotted ‘multiple’ people who were armed.”

“There were people wearing body armor. One person pulled out a loaded pistol magazine, he clipped them together and said, ‘You’re next,'” Mark McCloskey earlier told NBC. “We were threatened with our lives, threatened with the house [being] burned down.”

Gardner, however, claimed the protesters were “peaceful” and were met with “guns and a violent assault.”

“We must protect the right to peacefully protest, and any attempt to chill it through intimidation or threat of deadly force will not be tolerated,” she said in a statement.

Albert Watkins, a lawyer for the couple, explained that under state law, the Castle Doctrine, “a person has the right, has the absolute unmitigated right to protect his or her castle or family while on their property.”

Hawley pointed out: “They felt that they were being threatened, the video shows folks on their property shouting threats at them. And, the truth is: Tthey never left their property. I mean, they never went toward the crowd, got off the property – you know – waved the guns around to get them back on the street. They stayed right where they were which is their right to do.”

He also had distributed fire extinguishers around his home.

Suddenly, there “was a flood of people,” he said.

“We weren’t concerned about it until it got up to the point where the Kingshighway gate was and realized there was no security, no police, nothing to keep them from coming in.”

He reported seeing protesters break a locked gate and come onto private property.

The McCloskeys then grabbed their weapons and stood outside.

“I believe in my heart of hearts that the only thing that kept those mobsters, that crowd, away from us is that we were standing there with guns,” he said. “If I was in the same situation, I’d do it all again.”

Others in the neighborhood signed a letter in support of the protesters.

The report said video appears to show protesters holding an apparently undamaged gate open for others, but later images show it was broken and folded over.

The couple said they received death threats and heard vows of, “We’re gonna burn your house.”

The Business Insider reported he described the experience as “terrorism.”

“What’s the definition of terrorism? To use violation and intimidation to frighten the public,” McCloskey said. “That’s what was happening that night, that’s what happened to me — that’s the damage I suffered.”