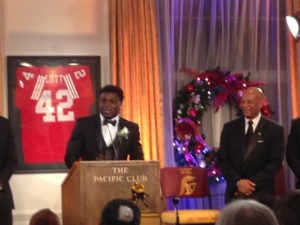 Peppers was recognized twice this season as the Lott Impact Trophy player of the Week. This versatile athlete, projected as a first round NFL draft pick, returns punts and kicks, starts on defense and also played part time running back this season. Michigan Head Coach Jim Harbaugh compared Peppers to Jim Thorpe being an offensive, defensive and special team threat. Peppers ranked third in the nation in punt returns, recorded 70 tackles, including 16 for losses’, and accounted for over 700 total yards this season.

The well deserving Peppers was raised by his mother after his father was sent to prison when he was a child. His brother Don was killed in 2010 when Peppers was 14 years old.

This year’s Pacific Club IMPACT Foundations Honorary Award went to former UCLA Coach Terry Donahue recognizing his development and commitment to the California Showcase, a free tryout for high school senior football players that have not received Division 1 collage athletic scholarships. In four years, the one day camp has been responsible for over $13 million being made available for scholarship aid to 497 athletes.